How to Master Chinese Tones

In the 18th century, a French Jesuit in China wrote a letter describing his encounters with the Chinese language.

“I will give you an example of their words. They told me shu signifies a book: so that I thought whenever the word shu was pronounced, a book was the subject. Not at all! Shu, the next time I heard it, I found signified a tree. Now I was to recollect, shu was a book, or a tree. But this amounted to nothing; shu, I found, expressed also great heats; shu is to relate; shu is the Aurora; shu means to be accustomed; shu expresses the loss of a wager. I should not finish, were I to attempt to give you all its significations.”

Any student of Chinese can empathize with the Jesuit’s bafflement surrounding the number of words that sound similar in Chinese. Chinese does in fact contain more homophones than any other modern language. However, while the words that the Jesuit listed sound similar, he omitted a crucial distinction: They are all spoken with different tones.

Tones are one of the unique complexities of learning Chinese, and one of the elements that make learning the language so interesting. All spoken languages use pitch to express emphasis and emotion, but a tonal language uses differences in pitch to distinguish words and signify meaning. Pronouncing a word without the correct tone is the same as pronouncing it without the correct vowels or consonants. In speaking, learning to inflect tones properly is crucial to being understood. In listening, accurately identifying tones improves comprehension by making it easier to distinguish between words that sound similar.

Learning tones in Chinese can be tricky for those that don’t already speak a tonal language. The problem is compounded by the way that tones are commonly taught, which often leads to confusion and bad habits. However, by identifying these common misunderstandings and adopting new strategies, you can master tones and conquer one of the most intimidating aspects of learning Chinese.

Breaking down the tone chart

When most Chinese learners start learning tones, they come across a tone chart similar to the one below. 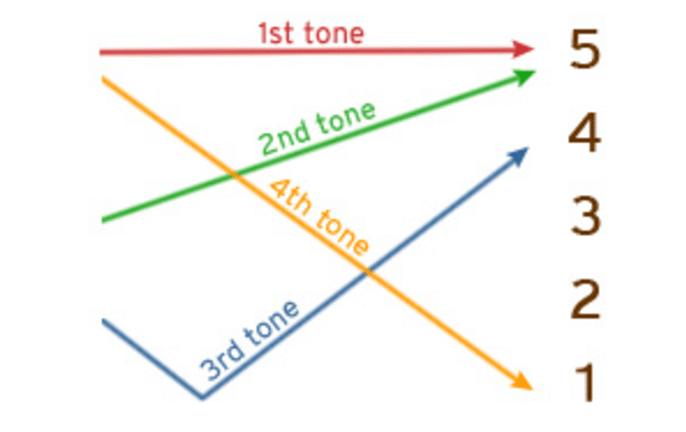 This chart attempts to give learners a basic visual idea of the pitch contours for each tone. The first tone is high-pitched, while the second tone is rising. The third tone goes down then up, and the fourth tone descends sharply.

Unfortunately, this mapping doesn’t accurately reflect the true pitch for each tone and, when taken literally, it can create a poor mental model for how tones are really pronounced.

Below is a graph for each tone’s true pitch when spoken by a native speaker, which provides a more accurate visual representation of Chinese tone pronunciation. 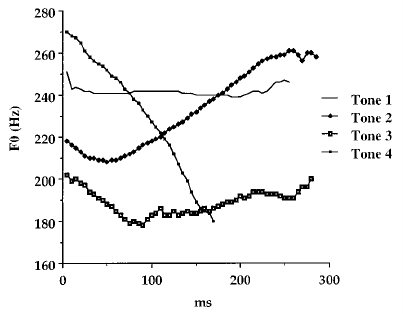 By referencing this diagram, we can see a few things that contradict the standard tone chart.

When learners see the first tone represented in the standard tone chart they assume they’ll need to reverse puberty in order to get their pitch high enough to reach it. Their pronunciation becomes exaggerated and unnatural. In reality, the first tone is just slightly elevated. It also has the most consistent pitch of any tone, with almost no fluctuation in frequency. When pronouncing the first tone, avoid trying to launch your pitch to the moon and focus on keeping a slightly elevated, flat pitch.

This flatness is even more prevalent when pronounced along with other tones in a sentence, where it adopts a simple low, flat sound. New learners will often try to mimic the path in the standard diagram and overemphasize the rising behavior, leading to confusion between the second and third tones. In practice, it’s more effective for learners to think of the third tone as a low, flat tone and to not focus on trying to match an exaggerated falling and rising path.

The final flaw with the standard tone diagram is that it represents each tone as having a similar rate, or speed at which it is rising or falling. This can cause misinterpretations as it seems like the fourth tone falls at around the same speed that the second tone rises. In reality, the pitch of the fourth tone decreases much more rapidly than the consistent rise of the second tone. This quick drop in pitch leads to the fourth tone sounding slightly more forceful in natural speech.

However, learners should be cautious not to confuse a sharp decrease in pitch with a requirement that you sound “angry” in order to pronounce it correctly. The fourth tone gets its clarity from the drop in pitch, not by being pronounced with too much force.

Tones need to be practiced in pairs

Deconstructing the tone charts above is helpful to understand the true behavior of each tone, but in reality tones are almost never spoken in isolation. In spoken Chinese, a tone’s pitch is relative to the tones that precede and follow it. By practicing how tones sound together, you can start to recognize the different tones more quickly, and drastically improve your tonal accuracy.

The most effective way to practice the relationship between tones is by examining tone pairs. Focusing on tone pairs is important because the majority of Chinese words are combinations of two syllables, meaning that most tonal relationships are pairs of two. Because there are 5 tones (and the first character of a word can never be spoken with a neutral tone), this means that there are only 20 possible tone pair combinations. For example, a first tone combined with a first tone, a first tone and a second tone, a second tone and third tone, and so on.

Let’s take a look at a few examples to see why identifying the relationship between tones is so important.

As you can hear, the vowels and consonants for each word are completely different, but the pitch and pattern are the same. The first character is pronounced with a slightly elevated pitch followed by the gradually rising second tone.

Try repeating this same pattern for the word 中国 (zhōngguó) to help reinforce the cadence and pitch pattern in the examples above. You’ll see that once you learn the way that these tones should sound together, applying this pattern to other words with the same pattern becomes easier and your accuracy will improve.

Let’s focus on a slightly more difficult tonal relationship, the rising second tone paired with the falling fourth tone. Try to recognize the pattern in the examples below.

Just like the first example, despite the words being completely different, there is clearly a recognizable pitch pattern. You can practice and mimic this pattern when pronouncing words with the same tone pair like 邮票 (yóupiào) to improve your pronunciation and listening accuracy.

Now, let’s move on to arguably the most difficult tone pair for new learners.

Because both of these tones have rising and falling actions (although we covered in the previous section that the third tone is better thought of as simply a “low” tone) new learners often have difficulty speaking them accurately when they are paired together. It’s common to attempt to raise the third tone above the beginning of the second tone, causing the pronunciation to sound like two second tones, or even a second tone paired with a third tone. Listen to the examples below to identify the correct pattern.

Hear the simple, low (and flat) tone at the beginning that meets the second syllable and then rises up? This same pattern can be repeated with every word that follows this tonal combination. Next time you pronounce a word like 美国 (měiguó), repeat this low to high pattern to help form the right pronunciation habit and master this difficult combination.

The fact that there are only 20 tone pairs is a real advantage to Chinese learners and makes learning tones significantly easier. As you begin to recognize the patterns for these different pairs, you’ll be able to repeat them more accurately when faced with a new word. “What is the relationship between these two tones? Oh, I know this pattern, it goes like…”

The most effective way to memorize these different patterns is through consistent practice and repetition. We created Daily Chinese not just to help people learn Chinese vocabulary in the simplest, most efficient way possible, but also to give learners an easy way to reinforce good pronunciation habits. By practicing a little bit every day, these patterns will be stored in your long term memory and you will be able to more quickly recall them when encountering a new word.

There are additional complexities to tones that aren’t mentioned above, like when the tone of a word changes in certain tone pair combinations. But, by deconstructing the misrepresentations of the standard tone chart and focusing on the consistent patterns found in tone pairs, you’ll be able to start dramatically improving your ability to hear and speak tones correctly.

While the word shu may mean the same thing to a French Jesuit from the 18th century, it will mean vastly different things to you, all thanks to its tone.

How Chinese is Different from Other Languages

Why Most Apps for Learning Chinese Don't Work